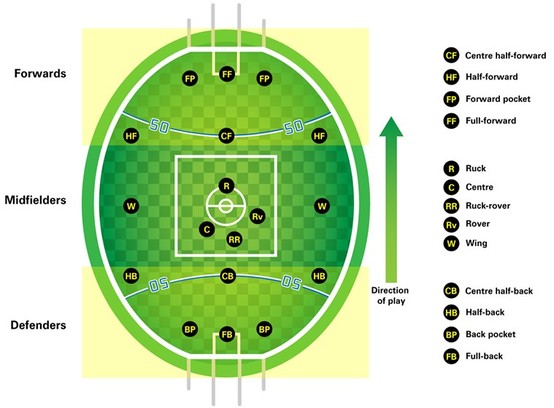 ﻿AFL Player Positions and Their Roles

The AFL field is split up into three main parts, Forward, Midfield and Defence. Each part has six positions which means there are 18 people on the field at any single time. Each position has its own responsibility and is crucial for each position to perform well for the team to have a good game.

The full-forward is usually a big or solid player that can take a big mark and provide good leads. The full-forward will usually play close to the goals as a main target deep in the forward line. They often are in one-on-one contests so need to be strong to out mark their opponent.

Forward pocket is a position for a smaller more skilled player. They can kick unexpected goals and create something out of nothing. They are usually really agile so they can dodge and weave through defenders. They are also known as a second full forward as they can be another target for kicks coming in to the forward line.

The half-forward is usually a player that can deliver the ball to the bigger targets. They usually play up the field more and deliver the ball down the flanks (sides of the field). They also can be an alternate target for balls coming in to the forward line.

Centre Half-Forward is often known as the hardest and most demanding position to play. The centre half-forward has to take good marks and kick good goals. They need to be strong but also have stamina to get the ball and kick a goal.

The wingmen are hard-running players that work from forward 50 to defensive 50 and are responsible for delivering the ball forward. They usually run in space and help out the other midfielders.

The ruckman needs to be tall and active. The ruckman has to follow the ball around the field and needs to get to every ruck contest. The ruckman’s responsibility is to win hit-outs and feed the ball to other midfielders in contests.

The ruck-rover’s job is to win the ball in contests and follow the ball down the field. They need to be in the right position to receive the ball from the ruck taps. The ruck-rover needs to be a fit and tough player that can tackle and read the ball well.

The rover needs to be an agile and fit player that can collect the ball from the ruck-rover and ruckman. Rovers also follow the ball all over the field and also need to be able to tackle and apply pressure to the other team.

The job of a full-back is to stop the full-forward from marking the ball and scoring goals. The full-back needs to be strong and fit to contest with the full-forward. Full-backs usually do the kick ins when the other team scores a point. They need to spoil the ball in a contest and then get the ball out of the defence as quick as possible.

The back pocket needs to be able to spoil the ball and not let the opposition mark it or kick goals. Back pockets usually are fast as they generally play on the smaller more agile forwards.

The half-back player is mainly defensive but can also be attacking by taking the ball out of defence and pushing up the field. They need to be able to spoil the ball but also be able to compete and win the ball in contests.

The role of the spare man in defence is to get to every contest and outnumber the opposition so that they can clear the ball out of their defensive 50.

Taggers are used to shut down a threatening player on the opposite team. They run with, mark and follow their selected player to try to lessen their impact on the game. Taggers are often very fit so they can follow their opponent the whole game.